This summer Jacob Lambert and myself decided to build a roundwood timber framed structure that could be disassembled and transported, to be used as a flexible space for events and as a showcase for roundwood timber framing. Its first unveiling would be at Shambala Festival in Market Harborough. Initially the plans were to create an octagonal structure, but worries about getting a fitted canvas made within the three week window that we had available, made us opt for a rectangular structure with pitched roof.

However, we were still interested in experimenting with less conventional styles of frame, as most roundwood structures we had seen were based on A-frames, and we were sure that other styles would also work with this vernacular. An important factor in our design was that there be no posts sitting within the footprint of the structure as we thought these would interrupt the space and make it less practical. The design process was ongoing throughout construction, with many alterations being made along the way. 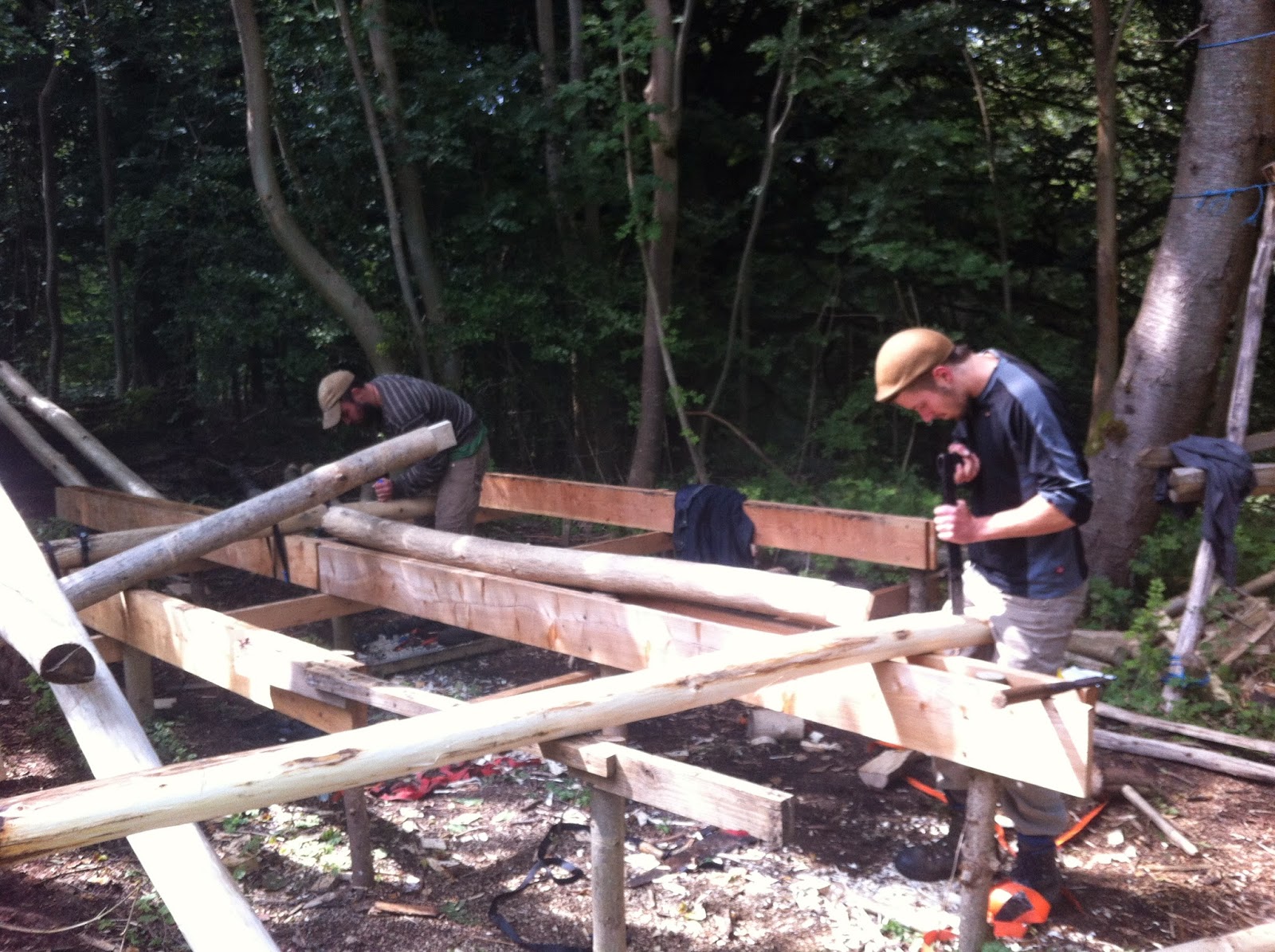 The frames were constructed in the woods that I manage, using Ash and Poplar for their lightweight properties and availability. Although these woods are not particularly durable when exposed to the elements, this will not be an issue as the structure is taken down and stored inside after each event.

The photo on right shows timbers being worked on the framing bed. I (on right) am using a 'stab axe' - a kind of slick chisel to flatten the sides of a tenon on one of the poplar posts. Poplar is lovely to work with edged tools.

The structure consists of three independent frames which are then joined together with horizontal wall plates and a ridge pole and then braced diagonally. The two end frames are modified A-frames which we called 'star frames' due to the diagonal bracing that supports the ends of the horizontal of the A. 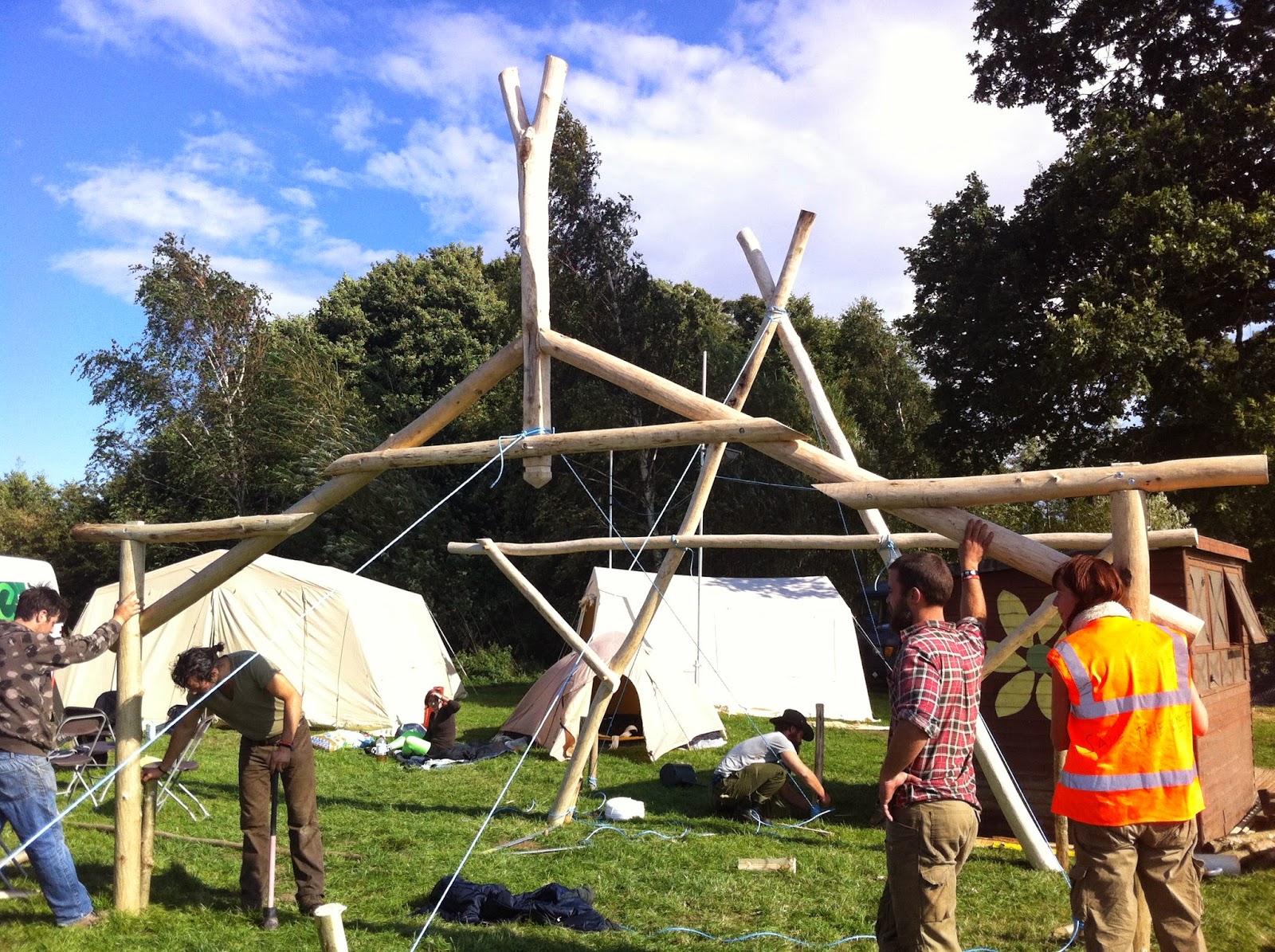 The central frame incorporates a number of elements of traditional timber framing design including upright posts, interrupted tie-beam and king post. It is essentially a truss frame except the vertical posts form an integral part of the frame, rather than the truss sitting on a wall plate on top of the posts. The king post was made from a natural fork that we then hewed square to reduce its size and to form a bit of a feature. The interrupted tie-beam raises up the bottom of the king post so that people don't bash their heads on the pretty little pyramid at its base.

The frames were bolted together and then covered with false pegs made from oak (shhh...) to allow it to be taken apart with relative ease. The canvas for the roof was made by Roland at Custom Canvas Structures - a friend of Jacobs who makes beautiful marquees and tents. Big thanks to Mikey Pea and Pumpkin who helped us construct the frames in the woods and to Pedallers Kitchen crew and especially Stevie and George who were invaluable during the onsite construction process. 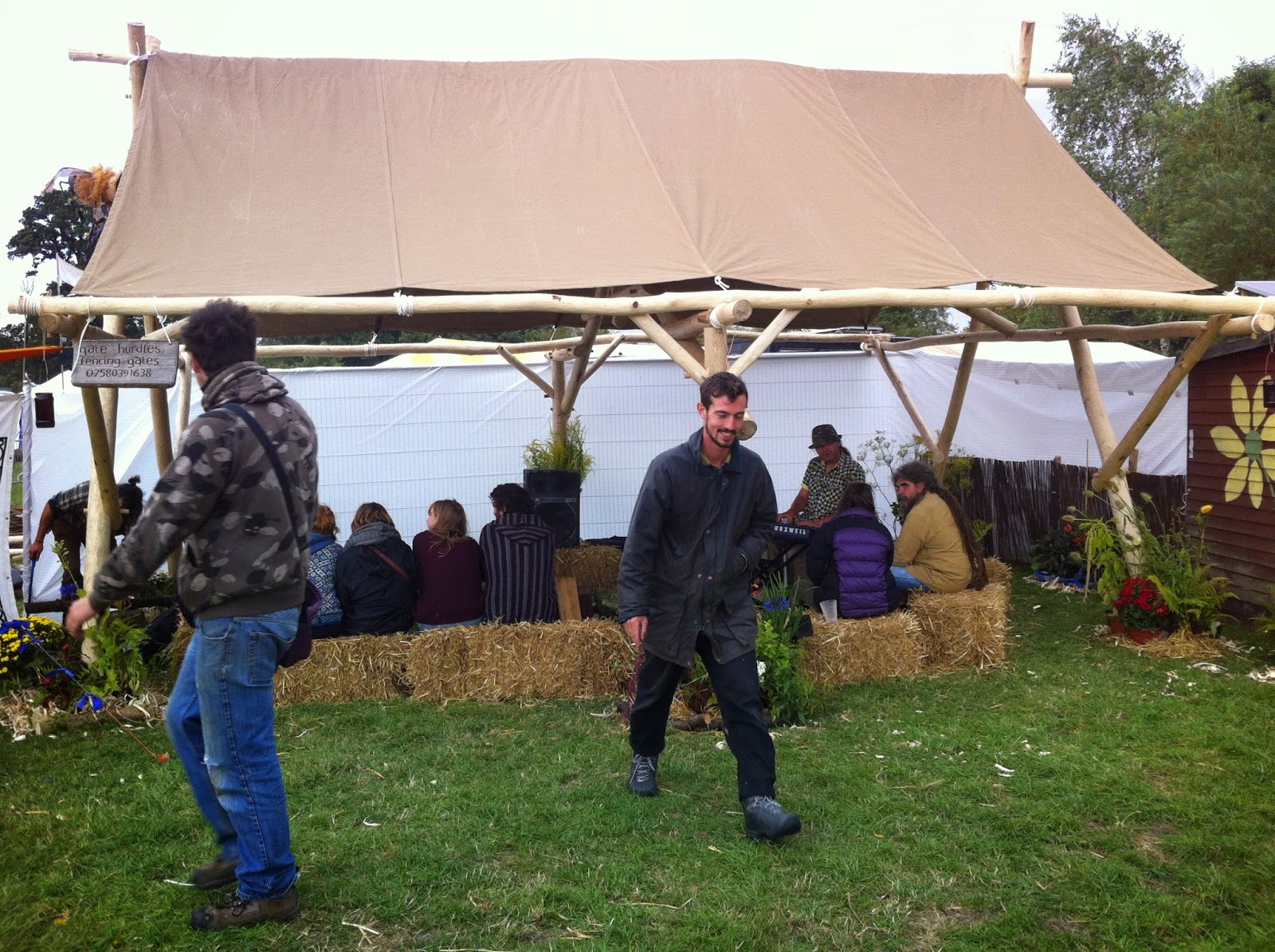 During the festival it was used as a workshop space and hosted folk sessions during the evening.

The structure is available to hire for events. It measures approx. 6.5m x 5.5m. We are planning on creating woven wattle and canvas side panels to allow the structure to be more enclosed when required.

Posted by Pete Ditchfield at 04:26